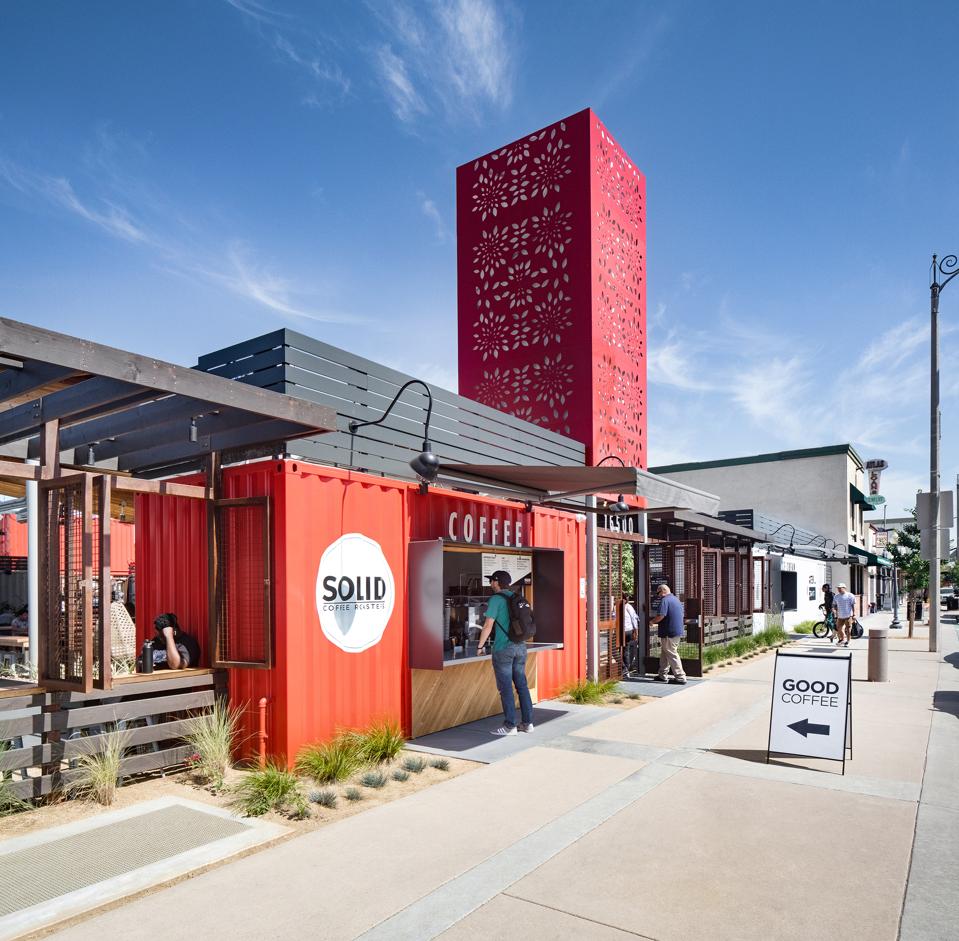 SteelCraft Bellflower (16500 Bellflower Blvd.) is an anchor in the city’s ongoing revitalization efforts. Studio One Eleven

Made from 14 repurposed shipping containers, SteelCraft Bellflower offers 15,000 square feet of dining, drinking and social space. Studio One Eleven positioned the cargo containers around a central courtyard with a curated offering of vendors. “We designed SteelCraft Bellflower for local, independent vendors to generate cohesion in the core of an existing community,” says Studio One Eleven Senior Principal Michael Bohn, AIA. “Repurposing containers not only creates a sustainable and cost-effective development, it also creates an energetic sense of place not equaled by all-new construction. As with all of our cargo environments, we designed SteelCraft Bellflower to be a place for the community to eat, drink and be together.” 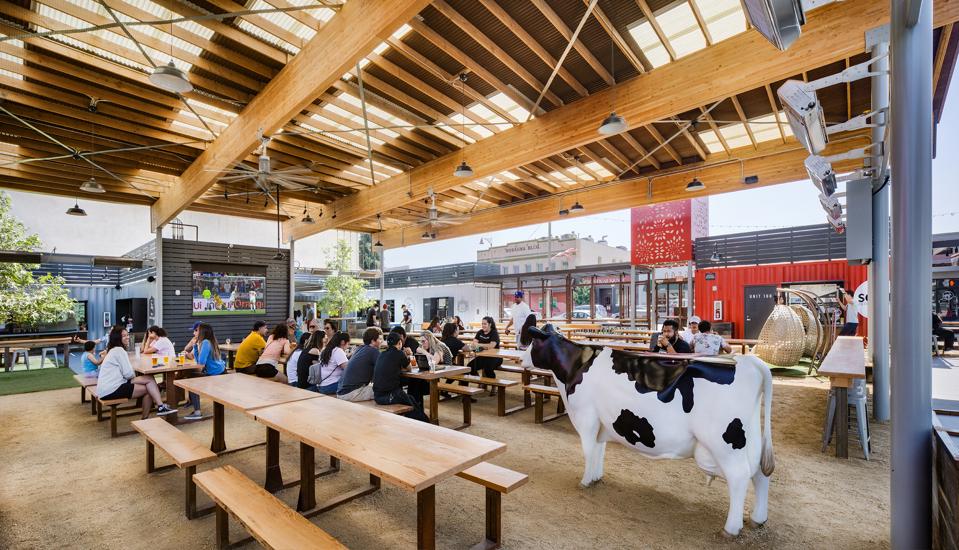 The design encourages connection through family- and pet-friendly spaces that include an entertainment stage and a barn-inspired shade structure evoking Bellflower’s dairy-industry roots.Studio One Eleven

According to Bohn, the decision to base the project in Bellflower was intentional, stating that the SteelCraft hospitality team seeks out “overlooked communities that are food and beverage deserts.” Bohn further explains that “for decades, Bellflower residents had to travel to adjacent communities to find interesting food options. Now the reverse is happening–those communities are coming to eat at SteelCraft Bellflower, which is also bringing new visitors to the surrounding downtown and its existing retail destinations.”

President and CEO Martin D. Howard of Howard CDM (project developer) says that “everyone from the construction side, to the SteelCraft team, to Studio One Eleven and our kitchen designer, Turpin Design Group had an important role in driving this project,” which Howard views as a “vision of craft, community and restoration.” Bohn adds that city buy-in was positive from the start, while Bellflower Mayor Sonny Santa offered enthusiastic public support for the project. “Howard CDM’s investment into the City of Bellflower shows that our community is moving in the right direction,” Santa stated, adding that “the welcoming courtyard and variety of craft food choices is fast becoming downtown Bellflower’s newest hangout for families.” 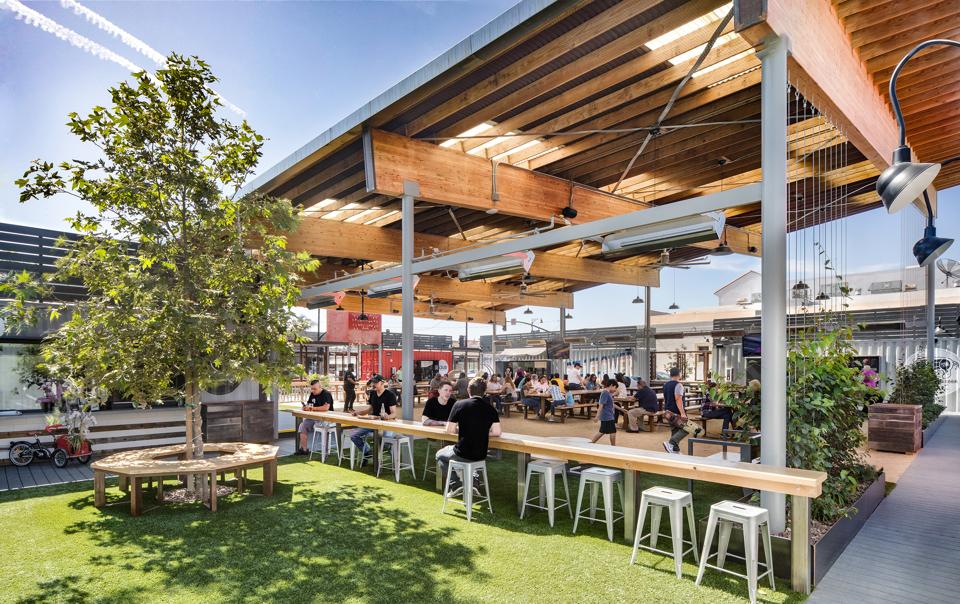 "We find that people connect well and are comfortable with containers. One reason for that in our region may be because we are geographically near the ports of Los Angeles and Long Beach," Michael Bohn. Studio One Eleven

When asked why the team opted to use repurposed shipping containers for a large-scale hospitality project, Bohn says that the team is “intrigued with alternative construction typologies. Containers definitely are a differentiator when compared to conventional retail design,” offering the limitations of a fixed module while providing value in terms of being “slightly more affordable than conventional construction.” According to Bohn, the biggest value in working with shipping containers was derived from the time saved on construction, with a concept-to-completion timeframe totaling only 18 months. 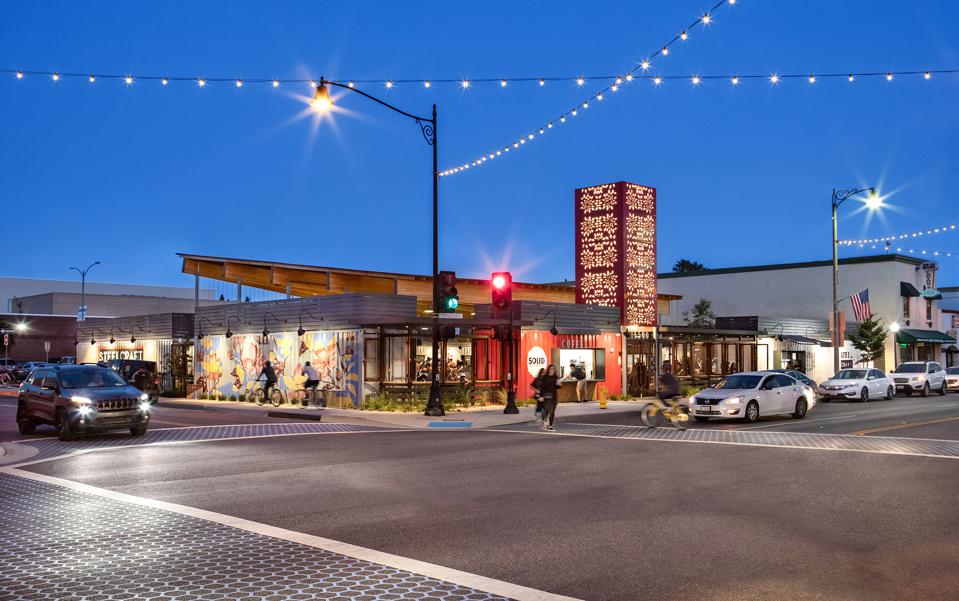 The exterior of SteelCraft Bellflower. Studio One Eleven