As President Trump continues his harsh criticism of California’s homelessness problem, experts are focusing on solutions that are most helpful to homeless people. 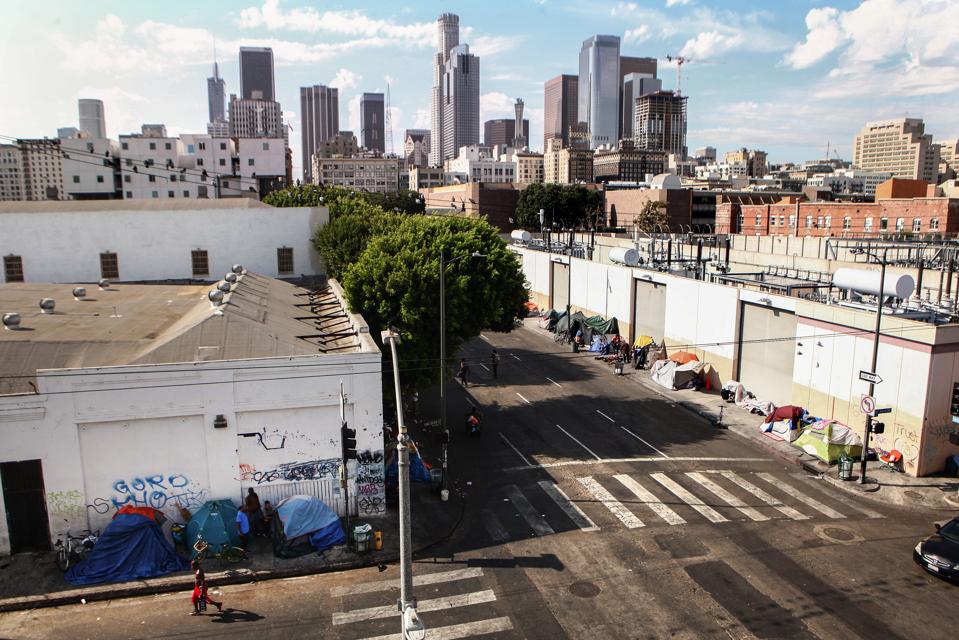 A homeless tent encampment on Skid Row in Los Angeles. President Trump has criticized California over its homelessness problem.Getty Images

President Trump’s harsh criticism Tuesday of California’s homelessness problem is raising alarms about the administration’s plans to displace people without real attention to alternatives. Before his two-day trip to California, Trump complained that the state’s homelessness crisis is harming the “prestige” of major cities like Los Angeles and San Francisco, remarks that housing advocates said showed more sympathy for real estate investors and property than the state’s homeless population.

Speaking to reporters aboard Air Force One while on his way to Silicon Valley for a two-day California trip, Trump said homeless people are living in "our best highways, our best streets, our best entrances to buildings."

Trump’s remarks come on the heels of a report released by the administration on Monday titled “The State of Homelessness in America.” The report stated that 47 percent of the country’s homeless population is concentrated in California, with San Francisco, Santa Rosa, San Jose and Los Angeles being the cities with the highest amount of homeless people.

“As a researcher who has done a lot of work on homelessness, I think there’s a significant role for the federal government, and that is in funding housing assistance,” said Cunningham. “The president can propose budget increases for things that we know work, which are housing vouchers. There are not enough of them. Right now, one in five of the people who qualify for assistance actually receive it. We need more housing assistance. That is the surest way, the evidence-based way, to address this crisis.”

Research and experience have shown that investments in permanent housing are practical in reducing homelessness as well as being cost-effective.

“The evidence shows very conclusively that if you want to end homelessness for people and you want to protect them from future homelessness that you should provide them a housing subsidy,” said Cunningham. “The president has the power to propose increases to Congress, which Congress would need to vote on. There hasn’t been enough investment from the federal government in housing assistance, and that is, in part, why we have this crisis.”

California accounts for most of the country’s homeless population, and it’s growing. As of January 2018, there were an estimated 129,972 Californians on the streets on any given day, according to the U.S. Interagency Council on Homelessness. Of that total, 6,702 were family households, 10,836 were veterans, 12,396 were unaccompanied young adults (aged 18-24), and 34,332 were individuals experiencing chronic homelessness.

Cunningham said, “California’s homelessness problem is something that has existed for a while, and it is something that the state has been working on and as far as I can see, they are focusing on the right responses, which is to say, investing in housing-based solutions. I don’t think that a crackdown — first of all, I don’t know what that means — but I think that we know from past history that criminalizing homelessness doesn’t really work. It doesn’t resolve the problem. We also have seen recent decisions from the courts that say that absent having shelter or housing for people it actually is illegal to cite or arrest people for sleeping on the street.”

While the National Law Center on Homelessness and Poverty agrees that unsheltered homelessness is a crisis in California and across the country, it is  concerned about the administration’s plans to displace people without real attention to alternatives.

“Simply razing encampments without ensuring adequate alternatives is not only inhumane, costly and counterproductive, it would also violate fundamental constitutional rights,” said Maria Foscarinis, executive director of the Law Center, in a statement.

The Law Center states that one solution for this crisis is unused federal property and urges the administration to prioritize this underutilized resource.

An existing law requires federal agencies to make such property, buildings and land, available at no cost to use for housing, shelter, job training and other services to aid people living with homelessness.

“In California and beyond, we hope the administration will follow their own federal plan to end homelessness, developed with 19 federal agencies and focused on permanent solutions and reducing the criminalization of homelessness,” according to the Law Center. “These agencies have put forth guidance on ending encampments through housing that should be the baseline for any efforts to end the California crisis, and our Tent City USA report and Encampment Principles and Best Practices build on these.”